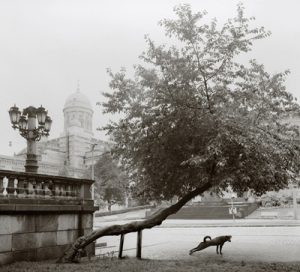 Pentti Sammallahti was born in 1950 in Helsinki, Finland. He began photographing at 11 and by 1971 began to exhibit extensively in Finland and throughout the world. Sammallahti has travelled widely as a photographer, from his native Scandinavia, across the Soviet Republics through Siberia, to Japan, India, Nepal, Morocco, Turkey, across Europe and Great Britain, and even to South Africa. Sammallahti’s travels and interest in fine printing and lithography has led him to publish numerous portfolios of which the largest and most well known is “The Russian Way.” As a benchmark figure in contemporary Finnish photography, his work has a supernatural sense of a moment in time with the sensitivity and beauty of the world displayed through its animalistic existence. His particular use of dogs, which reflects the human existential experience, shows the shared nature of the earth with a gentle humor and fleeting attitude. Sammallahti describes himself as a wanderer who likes the nature of the great north, the silence, the cold, and the sea. He likes the people and the animals of far off places and he records the relationships of those people and their environment. Like people, animals wander into his photographs and then disappear as naturally as they appear.

As a master craftsman, he meticulously tones his prints, which in turn helps to produce the images and display the brief moments in time. As a passionate seeker of the perfect mechanical printing method, his own innovative printing techniques and reintroduction of the portfolio form have re-awakened broader interest in published photographic art. Influenced by the idea of ‘artist books’ – individual works in which the artist is responsible for the whole: photography, the making of prints, layout, design and typography, reproduction and often the actual printing process either with the offset or the gravure method. His work is represented in many international collections, a large survey of his work will be the subject of a Europe-wide traveling exhibition in 2011.

Sammallahti taught at the University of Art and Design in Helsinki for 17 Years, retiring when he received a 20-year grant (1991-2011) from the Finnish government, an unusually long endowment, which is no longer awarded. Sammallahti was honored to be included among the 100 favorite photographs in the personal collection of Henri Cartier-Bresson, which was the inaugural exhibition for the Foundation Henri Cartier-Bresson in 2003. His work has been exhibited world wide, and was given an extensive festival in Arles, France. As a teacher, he has an enormous influence on a whole generation of documentary photographers in Finland. Since 1979, Pentti Sammallahti has published thirteen books and portfolios and has received awards such as the Samuli Paulaharju Prize of the Finnish Literature Society, State Prizes for Photography, Uusimaa Province Art Prize, Daniel Nyblin Prize, and the Finnish Critics Association Annual.